A while ago a poster on one of the discussion boards I frequent, which one eludes me at the moment … maybe at ENWorld … anyway … a poster asked how to incorporate the Warforged from the Dungeons&Dragons campaign setting Eberron as a player character race in WFRP.

As to be expected when it comes to roleplaying gamers, the poster received some … not so useful suggestions. But there were some who stepped up to the challenge and tried to find an explanation as to how the Warforged would fit in. I was among those brilliant .. ehm … chaps who tried to fit a rather alien race concept into WFRP.

To start with, what is a Warforged, anyway? This is what Wikipedia has to say about the subject: 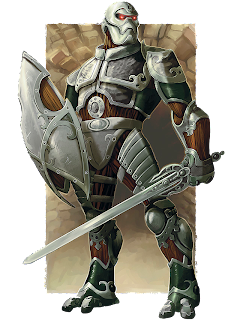 “”The warforged are a race of living, sentient constructs, superficially similar to golems. Warforged are composed of a blend of materials: predominantly stone, wood, and some type of metal. In Eberron, they were created by House Cannith in magical ‘creation forges’ to fight in the Last War, based on technology recovered from Xen’drik. When the Last War ended, they were given their freedom at the Treaty of Thronehold. Though they have free will, whether they have a soul is not known with certainty; they can be resurrected by spells designed to restore human souls to life, but, unlike humans, never remember anything of their experience in the afterlife after such an event.

While they have no biological sex, warforged may adopt a gender role as part of their individual personality. They do not age as the other races do, and it is not known what effects time will have on them. It is generally assumed that, like all living creatures, their bodies must experience degradation over time. Like other races, warforged may take levels in any character class.”

So that’s the rub. And someone … Emerikol maybe … wanted to incorporate this into his WFRP campaign. So how would I do it?

If … and that’s a pretty big “if” … I would introduce Warforged in my WFRP campaign, I’d make them of dwarf origin, and look into dwarfen belief in ancestor spirits. The Warforged could be reborn dwarf souls, incarnated in metallic bodies to protect the Halls of the Ancestors, and maybe tasked with carrying out dangerous tasks outside the halls. They would be very rare, and most people would mistake them for armoured dwarf warriors.

DaveTheGame chimed in with a great idea:

“That’s pretty awesome. You could call them “The Grudgekeepers” and have them inscribed with an ancient grudge in ancient Dwarven, with an eternally preserved Dwarven spirit who keeps that grudge going.”

Awesome. The grudgekeepers would be a well kept secret though, and they would rarely venture into civilised parts of the Empire without a dwarven guide to speak to the humans and halflings. Such a guide and a grudgekeeper would make a good backbone for a more traditional party, as they recruit other races and classes to get the grudge dealt with.

A grudgekeeper would be fully armoured at all times if possible, and if not possible, swathed in ancient dwarven leather garbs and a cloak. And a crazy hat and face mask like V in V for Vendetta. In one way, he’s the ultimate Grudgekeeper.

“He was horribly scarred in a fire, so he can’t show his face without scaring the children”.

Alternatively I would go the golem route. That would in WFRP terms mean that an alchemical process was used to bring dead matter to life, and some sort of spark of chaos to give them sentient life. They would be hunted by witch hunters, and would have to hide from the rest of society, unless captured and bound to perform tedious and dangerous work. Read Feet of Clay by Terry Pratchett for more inspiration if you go this route.

Well, that’s it. I think The Grudgekeeper is a pretty good way of introducing Warforged from D&D into the WFRP world.

Any other race from another game you readers would like to have adapted to WFRP?