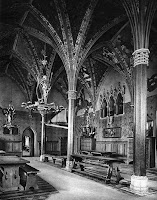 The grand capital of the Empire is a bustling metropolis, a teeming hive of scum and villainy, a confluence of holy influences, the push and shove of the crowds filling the streets, cries of help and sounds of brawling from the docks, seagulls eager for scraps of food, dogs, beggars, vendors, town criers … during the day the cacophony of sound is an assault on the senses for any right-thinking individual. Even in my lofty abode high up over the barely controlled chaos that is life in Altdorf it is impossible to entirely escape the commotion.

When I feel the need to rest my head I have the recourse of seeking out our libraries, but after my harrowing experience there last year I am loath to go down there. Instead I do as many pious Imperial citizens, I seek out sanctuary in any of the larger temples that are situated in the capital. There is of course one large site dedicated to each of the major deities, as befits proper faith and respect for the gods, but I tend to pay my homage to the lords of our souls at the largest of them all, The Great Temple and Citadel of Sigmar.

This immense structure, reverently referred to as “The Hammer” among the populace, is a haven for those in need of quiet contemplation, and it welcomes all. Well, almost all. The smelly beggars and insane rambling agitators are firmly redirected to any temple of Ranald they might find, and to be frank what business would the poor people have in fancier parts of Altdorf? The interiors are magnificent and lends an air of power and authority to the chambers and halls.

There is a multitude of high columns, pointed arches, ribbed vaults and tall stained-glass windows, all to impress a visitor and make him reflect on the deeds of the great Sigmar. Serene choir music is often heard wafting through the temple grounds, providing a soothing counter-point to the babble of the Altdorf streets. 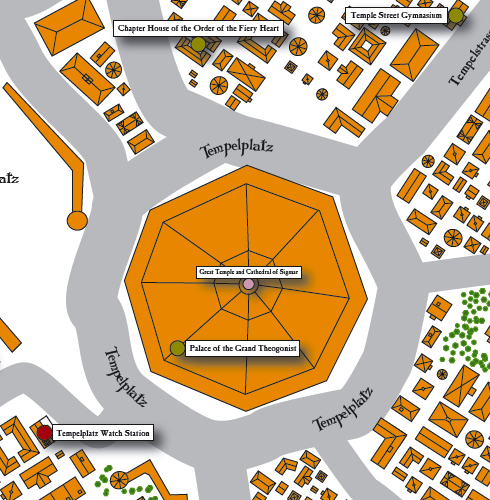