Close to the bank of the Reik, in the Universität Bezirk, lies one of the most curious buildings in Altdorf. But it is not the shape or architecture that makes this building of interest, it is the inhabitants. I’m speaking of course of Otto Stierne, the renowned astronomer, and Heirodüle Krangelschaft, the scandalous inventor. In a tall tower overlooking the Reik, Stierne houses his celestial observatory, filled with advanced Dwarfen telescopes, intricate models of the heavenly bodies and copious maps of the starry sky above us. Here he makes his observations, trying to chart the glittering night sky and link it to our history and future. Stierne is often consulted by the Emperor and his Electors before any large decisions, and this has earned him quite a following in the capital.

Many nobles and merchants seek out his advice, although it has never been proven that his predictions are more or less accurate than any other oracle’s musings. Commanding less authority, but surpassing Stierne in notoriety, is his good friend Heirodüle Krangelschaft, the inventor. He is most known for his theories about aerial flight by the harnessing the power of alchemy and mechanics, which has resulted in several spectacular public experiments.

Curiously quite a few of his failed inventions are acquired by unknown parties, for unknown purposes. His workshop resides in the lower parts of the tower, and are filled with tools, metal, wood planks, chemicals, glass tubes, drawings and books. Every now and then a fire will clear out the workshop, but so far the tower has stood the strain of having a mad inventor residing in it. 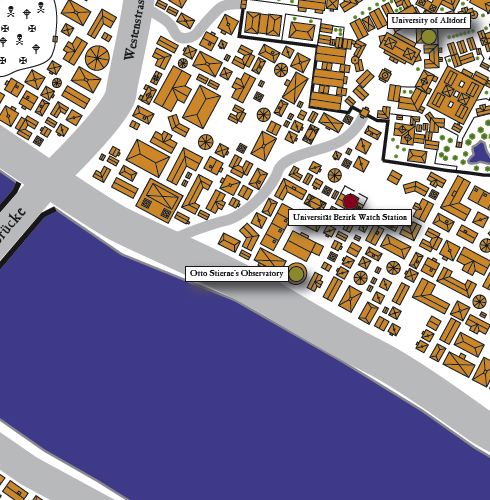