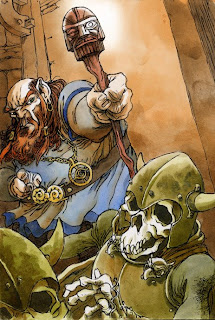 How often don’t you find dwarfs in fantasy that are short, grumpy fellas with an axe strapped to their backs and a flagon of beer in their hand? This is without doubt the most popular image of the fantasy dwarf, popularised by countless roleplaying games, and maybe most importantly in the blockbuster Lord of the Rings movie trilogy. Even in Warhammer Fantasy Roleplay, we are often treated to the stereotypical dwarf, even though I must admit there’s a twist; they’re also homicidal maniacs with punk hair.

Of course, there is nothing wrong with using that image when you are playing a dwarf character, or portraying a non-player character. But maybe it would be fun to portray dwarfs with other roles and demeanours once in a while? After all, it is not just human societies that have a need for, or give rise to, different personality types among the population. Take a closer look at the characteristics of a dwarf, and you’ll find variations within the basic theme that you didn’t think were possible!

This is the introduction to a short series of posts aimed at presenting six somewhat unorthodox ways of looking att dwarfs as characters in WFRP, or indeed in any fantasy roleplaying game. I’ll start off in the next post by examining the basic traits that are associated with dwarfish culture, and show how these traits can give inspiration for other personalities than the common dwarf thug. The game master will be treated to adventure hooks and the players get suggestions for new personalities which break the established pattern of how to look at a dwarf character.

The series is illustrated by Patrik Norrman, the talented and award-winning comic book artist and illustrator. If you enjoy his work and feel that you would like to commission his services, go to my profile and drop me an e-mail.

Stay tuned for more on dwarfs next week!