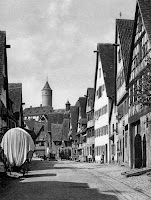 As I awoke to screaming and the smell of fire I hastily donned my britches and my overcoat and ran downstairs. I was certain that the inn I was stying in was being overrun by mutants and beastmen, and I was intent on making my way out of the building and find refuge with the City Watch before being slaughtered for my sins! As I burst down the stairs I found myself in the middle of a colossal drunken brawl. One of the … clients … had tried to lift the purse of a gigantic Kislevite warrior passed out at the bar. The man from the east had woken up in the middle of the process and the ensuing chaos had shaken me from my sleep. It was still night, and I retreated to my room. After a while the din died down, and quiet once again settled over the inn. Finally I fell asleep again. I was staying at The Burning Table in the Friedwang Bezirk, an inn along the main street not far from the North Gate. It was supposedly a clean and reasonable place to stay, and at least the innkeeper Matthias Tafel was a friendly fellow. But his clientèle was not. When I arrived I spotted a filthy group of thugs or adventurers and overheard them talking about a wizard and some magical item they needed to find, but I soon moved along when they noticed my presence. There were a few sell swords, ruffians and harlots there as well. My money could only pay for one night at the inn but I was too tired to look for other accommodations so I stayed. 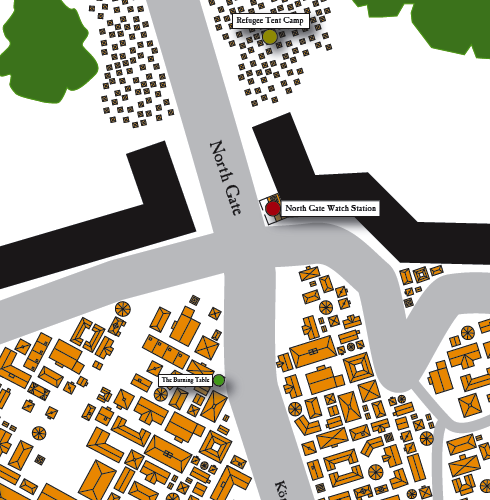 The Burning Table inn appeared on page 48 in Spires of Altdorf (SoA), the second installment of Paths of the Damned (PotD). I was disappointed that SoA didn’t include a more detailed map of Altdorf and also that it didn’t place the locations or gave clear information as to where they are to be found. Although I haven’t used the PotD I have gone through SoA and tried to place all the locations somewhere on my campaign map. I placed The Burning Table close to the North Gate which seemed a logical choice given the fact that the characters were coming from Middenheim.