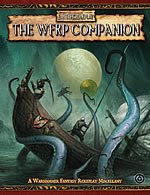 I remember one of my first moments of going “wow, this is so cool” in relation to roleplaying supplements. It was after seeing and thumbing through The Call of Cthulhu Companion for the first time. After that, I was sold on the Companion format. Rolemaster used Companions to great effect, and my own first steps as a game writer I dubbed The Unofficial Cyberpunk Companion. I did one for WFRP as well. So basically, I love Companions, and their eclectic mix of stuff that can be both enormously useful and mind-numbingly useless. But it’s the mix that’s the thing for me, the chance to read many different views on the game in question fills me with anticipation. So it comes as no surprise that I really like The WFRP Companion. I’ll be up front about that, and about the fact that I’m a sucker for the concept. The physical book is a softbound tome, it clocks in at 128 pages and it’s black and white. This is in my mind a very good format for a Companion product, to underscore its premise of “here are some stuff that might be cool for your game, but also some stuff you might not like”. In the pages of the book we find an abundance background, new careers, new rules and new NPCs.

The best, most interesting and useful articles are Freaks, Thieves and Travelling Folk; Life and Death on the Reik; Advanced Trade and Commerce; and Social Conflict and Advanced Criminal Trials. The rest of the pieces are well written and contains many fun and interesting ideas, but their utility is not as great for my campaign as the others.

Given the hit and miss of the usefulness of the articles, I think the price of the book is a bit steep. For some the mix has been a turn off, but for me the format makes The WFRP Companion an exciting book, and provides me with plenty of inspiration for my game. So with the above in mind, I highly recommend it, but also caution that you check it out as much as you can before purchasing it.