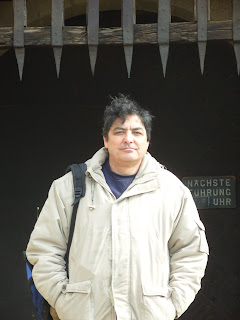 Regular readers of The Altdorf Correspondent know that I try to do my part to put the limelight on the many great and dedicated fans WFRP has, and the top notch material they produce and offer online for free. I try to make a Best of the Fans post every month, and believe me, there’s plenty of material to look through to find the very best. Each time I sit down to pick a fan project to highlight as a Best of the Fans effort, there is one name that always crops up. Alfred Nuñez Jr, pictured on the right.

I believe most know him as MadAlfred, map maker extraordinaire, but he is also the author of the well recieved sourcebook Dwarfs: Stone and Steel for WFRPv1 that was published by Hogshead in 2002, as well as Pretty Things, one of the earliest adventures for WFRPv2 that was published by Black Industries in the Game Master’s Pack. A while ago he released Empire at War online, a complete and massive reimagining of Empire in Flames, the ill-fated last part of The Enemy Within campaign, bringing it in line with the kind of WFRP imagery that the enduring fans of the game appreciate.

Myself, I think of Alfred as the grand uncle of The Altdorf Correspondent. If it hadn’t been for his and his co-conspirators’ work on compiling information about Altdorf from hosts of Games Workshop sources, this blog would probably be The Middenheim Correspondent … or something like that. So I dropped Alfred a mail, asking if he would be game for a short interview here, and here’s the result.

The Altdorf Correspondent (TAC): Tell the readers a bit about yourself.

Alfred Nuñez Jr (MadAlfred): Well, I am an American from California and (currently) 51 years of age. Apart from gaming, my reading interests include Ancient History, pre-Tudor British history (currently reading various sources covering 410–1066 A.D.), Archaeology, and Paleontology. I work in the garden to relax as well as occasionally go on walks/runs. The latter helps me sort out my thoughts on whatever WFRP material I’m currently writing.

TAC: How and why did you start playing WFRP?

MadAlfred: I moved my playing group from AD&D to WFRP in 1988. I thought WFRP was far more interesting a game to play with its darker elements. Odd as it sounds, I also liked the (then) concept that wizards in the game did not always dress in flowing robes and they could carry swords rather than daggers and darts.

TAC: What was it that primarily attracted you to WFRP?

MadAlfred: The darker tone, richer background, and career/skill based system were the elements that won me over.

TAC: How long have you been producing fan material?

MadAlfred: I have been writing fan material since 1994 or thereabouts. So, about 14 years.

TAC: What prompted you to do this, and to distribute your material for free, online?

MadAlfred: Since the game lacked official support, I wanted to further develop the background for my own use. Shortly after joining the old WFRP mailing list hosted by Clay Luther, I thought I would share some of my material to other subscribers. The reaction I received was pretty positive, so I started posting my other ideas hoping someone who find something useful to use in their campaigns.

TAC: A large and important part of your work has been compiling gazeteers and drawing maps. Why did you focus on these two categories?

MadAlfred: I found that both maps and gazetteers are helpful at generating game ideas as well as providing a quick reference material for GMs. I also found that these helped me focus in visualising the world at large and gave me a starting point for possible scenario plots.

TAC: What was the most difficult part of compiling the information on Altdorf?

MadAlfred: The most difficult part was determining how to incorporate the sketchy and sometimes contradictory information contained in many of the Warhammer novels. I had learned from one of the writers that there was no central authority among the editors of Games Workshop to ensure some level of consistency with Altdorf and its locations.

TAC: What is your favourite WFRP book?

MadAlfred: “Marienburg: Sold down the River” by far. My oldest son makes a cameo in the book as Miguelito “Little Round Head” Nunez in that book

TAC: What is your favourite WFRP fan material?

MadAlfred: The “A Private War” campaign by Tim Eccles.

TAC: What are your hopes for the future of WFRP, fan-wise or commercially?

MadAlfred: Commercially, I’d like to see WFRP move more towards the 1st edition in tone (grim and perilous) rather than stay with (my interpretation of) the 2nd edition change to heroic fantasy with spiky bits. I’m just not sure what FFG intends, if anything.

Moreover, I’d like to see more fan effort, though such can be uneven in quality. Warpstone magazine is a great source for ideas and a number of sites – for example, Liber Fanatica – put out quality material. So long as its fans care, WFRP will continue to be supported.

I think Alfred is right. WFRP has had its ups and downs, but there’s no denying that the fans care passionately about the game. And Alfred himself is one of the very best examples of this passion, which drives him to create material that make all our other games richer and more fun. So let me close this interview by thanking Alfred for answering my questions, and for all his efforts to make WFRP great!