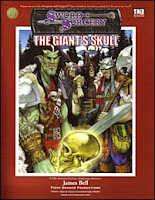 In this installment of Fanboy At Large, I cast my net back through the years, searching for the hidden gems of the vibrant and exciting beginnings of what will go down in history as the d20 era. After trawling a bit I hauled in my catch of the day; The Giant’s Skull, an adventure that clocks in at 40 pages, published in 2001 by Fiery Dragon. The flaming draconian was one of the first pioneers of the d20 market and brought to market several interesting and innovative adventures, but today they are mostly known for their counter collections. Although they do offer adventures as well through their web site, now that I took the time to check it out.

The Giant’s Skull is a remarkable adventure for one single reason: you get to play both sides of the story. Apart from that, not much stands out. Between the covers you find 40 pages of adventure material, split into two sections concerning The Giant’s Skull, a fairly powerful magic item. The text is reasonably well organised, but suffers from a confusing and somewhat back to front approach to explaining the plot. Apart from a very good cover, the art and maps are clear but nothing evocative. They do their thing, nothing more and nothing less.

The first thing that marks this adventure as something other than a run of the mill offering is that colour counters are included. The counters show pictures of the monsters and heroes of the adventure, and they can be cut out and used instead of regular minis for resolving combat. A great idea, and something Fiery Dragon later developed into a product line of its own.

The duality of the plot is of course the star of the show. The first time the players play the part of a gang of ogres bent on reclaiming The Giant’s Skull from the evil and nasty humans. The second round casts the players as their regular PCs tasked with retrieving the artifact from the evil and nasty ogres. Unfortunately the adventure in itself falls short of its true potential, and is basically an average dungeon romp. I feel that it is a wasted opportunity, but a GM who works with the format can spin the ogre versus humans conflict into something truly memorable.

Worth checking out, but expect to work with the story to bring out the adventure’s full potential!