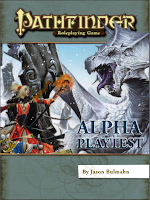 As you could read here and all over the D&D websphere yesterday, Paizo is releasing a roleplaying game called the Pathfinder RPG in 2009. It will be based on the 3.5 version of the d20 SRD (found here), it will all be in one book, it will have high production values … and there will be a one year open playtest. Click here for the forums for feedback.
If for nothing else, this is the thing that is of most interest to me. Not because of the rules discussions, not because of the wild ideas, not because of the flamewars, but for the process. It’s going to be a whole year of input from the fans, and we get to see how such an open playtest works and what the result will be. We’ll be able to see if it fractures possible supporters into opposing camps, generates alternative rules out of the gate, or amounts to much ado about nothing. My take is that many will take part in the playtest and come away disappointed that their input didn’t shape the game more than in a general sense. Many will also be frustrated that the game isn’t changing enough, and others that it is changing too much. And it’s going to be fascinating to see how Paizo handles all this. They will be scrutinised every step of the way by harsh judges.

For Paizo, I think that the open playtest is not so much a process to hammer out the rules, but a way to conduct a one year marketing campaign and focus group test. They will introduce rules here and there and see how people react, and use that data as input to their business plan, while at the same time hone to rules to attract as many gamers as possible. Which is not necessarily the same as honing the rules to be the best game in town. Hopefully the two will coincide, but I’m not really sure about that. There are many things that people want to have fixed with 3.5 that other people don’t want anyone messing with. Finding the balance between the two will be a tough feat.

If anyone can do it, it’s Paizo.